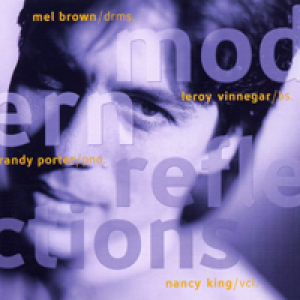 CDs are sold out!

Along with “The Walker” Leroy Vinnegar (one of the great bassists’ last recordings), drummer Mel Brown, and scat singer extraordinaire Nancy King, the pianist Porter delivers up this 2001 concept album with younger harmonies to older songs.

With this recording, Randy Porter makes his case for that small circle of great West Coast pianists; names like Mike Wofford, Alan Broadbent, Dave Peck and Andrei Kitaev. This is an album of a dozen time honored standards, five of which are performed by a dream trio of Porter, Mel Brown, drums and the late Leroy Vinnegar, bass. They hit an honest, easy-swinging groove on Takin’ A Chance On Love, Don’t Take Your Love From Me and Swingin’ On A Star. And Randy’s one chorus on I’ll Be Seeing You is the gem in the jeweler’s window. Add Nancy King — as relaxed and in the pocket as I’ve ever heard her — on seven vocals, my favorite of which is a nearly forgotten tune called Very Good Advice. It’s simply Nancy at her best. And don’t miss her “ah, this is a cinch” bop lines on Bird’s Now’s The Time. Nancy has always “told the story” with ballads and does so here with Never Never Land and the haunting Matt Dennis tune, The Night We Called It A Day. Porter is up to the task whether as leader or in his role as accompanist to Ms. King. What can we say about Mel and Leroy that hasn’t already been said? Peerless on their respective instruments, they make everybody else’s job a piece of cake.